How To Dispose Of Bleach? - What To Do?

Bleach contains chlorine which can be harmful to the environment. If there's a stain on a white cloth, we use bleach on it to get rid of that stain, and it is used for cleaning purposes also.

Randall Edwards October 24, 2022 — 5 minutes read
Manufacturers make sure to put the bleach in a safe container or bottle to make its use easy. They also mention all the guidelines you need to follow while using the bleach on the bottle. If you follow them accordingly, you won't face any problems. It's recommended to use the bleach by diluting it in water for safer use.

This way, you can dispose of the bleach easily in the drain. This article will guide you on how to dispose of bleach safely. So let's get started.

How Should You Dispose Of Bleach?

There are many ways to dispose of bleach without harming the environment; some are

It is the most common method people use to dispose of bleach. But first, you will have to dilute the bleach with some water. It's better to let the water tap run for a little time and drain the bleach. Once you're out of bleach and your bottle empties, let the water run for a few seconds more. Don't ever drain bleach directly in the drain without the water running.

If you want to get rid of the bleach without destroying or harming anything, then pour the entire bleach into the toilet and then flush it. Don't do that if you have an entire bottle of bleach. This method is good if you want to dispose of a small amount of bleach.

Mixing the bleach with some other whitening or cleaning agents is not recommended. No other liquid except water should be used for mixing/diluting. It doesn't seem so, but bleach can be toxic if it gets mixed with another liquid agent and reacts.

You can ask your friends or relatives if they need bleach. You can give your extra bleach bottles to them. If they don't need it, you can ask around your neighborhood instead of throwing and wasting it. You can also use social media for that. Just post on your social media account that you want to give away your extra bleach bottles. Interested people will contact you.

If you have anything that is in good condition and can be donated, don't think twice about it unless you need the money. You can donate your bottles to a school, hospital, church, or other charity center. It will be useful for them.

You can drain the bleach if it's in large quantities in the septic tank. This method is said to be very efficient. It doesn't cause any harm to the tank and is disposed of properly.

You can use the bathtubs to drain out the bleach. Just ensure that there's no other liquid inside the bathtub, e.g., body wash, shampoos, etc. Then drain the bleach while running down the water as well.

How To Get Rid Of Bottles?

There are guidelines mentioned on the bleach bottle if you want to recycle them. You just have to follow them. The bottle's specifications also include whether the bottle is recyclable or not.

Many recycling centers take such stuff from you and recycle it by charging you a little. You can find the nearest one by researching it on the internet.

Bleach bottles need to be emptied and dried completely before disposing of. Remove the cap and check for any remaining bleach. Put some water in the bottle, shake it to wipe off any bleach from the bottle, and drain it. Repeat this step 2-3 times, then put the cap back on. You can throw it in the garbage bag now.

They take such items from you and recycle them safely. They might charge a little from you for that, but it's worth it. Especially if you don't know the rules and regulations of the state you're living in; it's a great option.

Effects On The Environment

Bleach has some amount of chlorine and sodium hypochlorite in it, and it can be really dangerous for the environment. Careless disposal of bleach can cause

Chlorine works great if used in a specific quantity and concentration. The swimming pools are disinfected by adding a small amount of chlorine in it. Sometimes the swimmers complain about their eyes' redness or skin itching; it's due to an excessive amount of chlorine.

So it's not recommended to dispose of the beach in the water. If chlorine reacts with water, it releases dioxins. It can be really harmful and can cause many harmful diseases like cancer.

Bleach is used as a major component in many factories. Smoke is emitted into the environment, which is a huge cause of air pollution. Due to bleach exhaust, the environment gets affected.

Due to this increasing global warming situation, many health organizations made an effort to stop such harmful smoke emissions to prevent the ozone layer. That has resulted in reducing air pollution. These exhausts can cause many heart and blood diseases as well.

Some factories dump their waste in the water directly, which causes the fish to either leave the water space or die due to this water pollution. On the other hand, due to air pollution, birds get affected.

It can also cause severe coughing, stomach pain, irritation in the skin and eyes, and abdominal disturbance.

If you don't want to do it yourself, you can go to a nearby disposal center, and they'll do the job for you and won't charge you much because they're working to keep the environment safe.

You must do your part by taking such hazardous materials to the recycling centers yourself. Don't dispose of the bleach by throwing it on the ground, dumping it in the water, or tossing it in the trash bin directly. We hope the information was helpful to you. 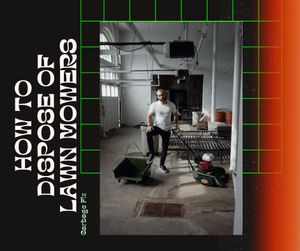 
How To Dispose Of Lawn Mowers? - Get Rid Of Them Easily!


How To Dispose Of A Couch? - Complete Guide To Maintain 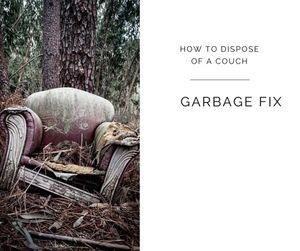