What not to put in garbage disposal? Keep Disposal healthy

The invention of trash disposal in the modern era has been a major aid to people worldwide. It's a quick and easy way to eliminate leftover food, which helps reduce rubbish and landfill space requirements.

Simple design and solid construction is the reason of disposals which are dependable workhorses. Unfortunately, even this strong gadget has limitations. Homeowners frequently have questions about trash disposal. So that we are here for the solution.

What not to put in garbage disposal - Keep Drains Clear

It's easy to believe everything goes down the sink, but that's not the case. Before installing trash disposal, consider what you want to throw away to save unnecessary effort and expenditure. As We talked to plumbers and experts, we realized how inconvenient broken garbage disposal could be. Here is a list of stuff you should never put in your garbage disposal if you want to keep it in good operating order and your drains clear.

It is not a good idea to pour coffee grounds down the drain. First, let's debunk the widespread home remedy misconception. Putting coffee grounds in the garbage disposal may temporarily disguise odors, but it may lead to more serious problems in the long run. Consider how discarded coffee grinds appear after being filtered. It will eventually reduce them to a thick, paste-like clump. It is also something that should not be flowing down your drains.

Grease and other fats are among the most dangerous items to dispose of in sink disposal. As fat cools, it hardens. If fats are not flushed farther down the line and accumulate at the bottom of the disposal unit, they might cause drainage and clogging issues.

Although it's preferable to keep oils and grease out of the garbage disposal, some meals, such as salad dressing, require fat. When disposing of food scraps, use cold water to keep the fat solid as it travels down the garbage disposal and into the pipes.

What are the connections between these three? They all swell in the presence of water and create a nuisance when trying to flush a drain. Throwing a few strands of spaghetti down the drain isn't a big deal, but it's also not something you should do regularly. When disposing of grains such as pasta, rice, or bread, run cold water for at least 30 seconds to prevent the grains from expanding and clogging the pipes. The same holds for oats and any other grain that expands when water exposes.

Do eggshells go in the recycle bin or the garbage can? To put it bluntly, no. When you drop an eggshell or two in the garbage disposal, it's easy to break it. According to one urban legend, You can use eggshells to sharpen swords. On the other hand, the membrane present on the shells' interior has an effect on th

e disposal blades. This is the inner layer of an eggshell. It may become entangled in the disposal's blades, fly loose and lodged in the impeller, or cause a clog in the pipes.

This is a contentious issue. While some argue that they are perfectly innocuous and even useful to your disposal by helping to sharpen the blades, others are concerned that the membrane lining of the shells would attach to the edges of the disposal and wrap around the shredder, causing serious damage.

Garbage disposals shine when it comes to getting rid of leftover food. It's crucial to note that just because they can grind doesn't mean they're angle grinders; they're not built to work with abrasive materials like bones. Don't stress out if you find a chicken wing or a fish bone in the garbage disposal. Disposals are tough kitchen equipment that can handle the odd bone. However, tossing a rack of ribs into your kitchen sink to pulverize them is asking for problems.

The Peels Of An Onion

Most onion peels, cores, and stems, as well as chopped, diced, and chunked onions, should be safe to throw away. The problem develops at the onion's thin membrane, which is positioned immediately beneath the dry outer skin of the onion.

Before dicing an onion, the outer skin is frequently scraped off and discarded. The coating, however, is so thin that it can slip past the disposal's blades and become trapped in the drain, where it acts like a cargo net on a pickup truck, capturing and keeping extra waste.

Fortunately, avoiding this problem is not difficult. Throw away the uppermost layer or break it into tiny pieces to flush it down the drain. It takes a few seconds, but it could save you hours of frustration or the need to hire a plumber.

If you can't cut it with a knife, put it in the trash instead of the garbage disposal. Most pits and seeds are tiny and spherical, making grinding them even more difficult. Furthermore, they make an awful noise when they roll around in your trash bin. Instead of putting additional work at your disposal, throw them out.

Peels too thin to be crushed into a starchy pulp may become clogged in the drain, but thicker peels may block the disposal. If this material gets into the pipes, there will be tremendous backups. Beans and other starchy vegetables are similarly affected.

💡
Foods that expand while soaked in water, such as pasta, oats, and rice, may continue to grow and form a blockage in the drain if not flushed out immediately. You can safely discard small scraps of food left on a plate after a meal in the garbage disposal.

Remember to put cold water through the trap to flush the food waste down the main sewage system. This will prevent food from sinking to the bottom of the appliance and expanding, potentially causing a clog. 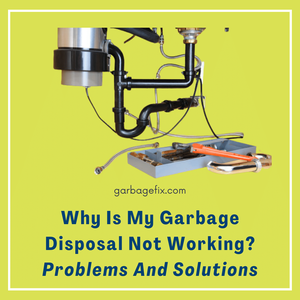 
Why Is My Garbage Disposal Not Working? Problems And Solutions


How To Unclog A Grease Clogged Drain? - Preventive Measures 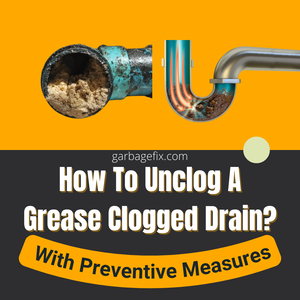